If you love winter blooms inside,
I suggest you don't discard your spent Amaryllis
bulbs after the holidays. Christmas 2011
a good friend gave me a lovely bulb which
bloomed in February. I didn't have the heart to throw it out
so instead waited until late spring and
planted it down in a protected area.

One day in late August the Amaryllis, once again,
spewed forth it's beauty. Surprise! 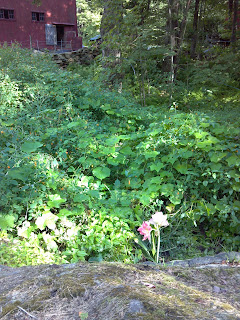 I thought best to read up and found that the bulb
will continue to renew seasonally. In the late fall I dug it up,
planted it in light soil and put it in the cellar until November.
[dark and cool being needed ~ a closet will do]
In December I brought it up and set it out of the sun in a cool room.

Just this week it began sending new buds.
It was suggested to feed it once a week
during this stage.
I am using a liquid 10-15-10 fertilizer. 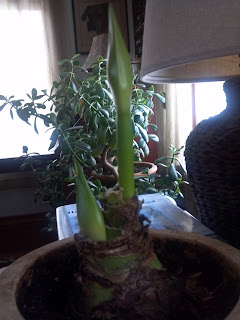 We have been doing the same with five Cyclamen for
many years and they just keep working their magic;
same pot, same soil, year in, year out.
The blooms begin in October and run through June each year.
This is a north facing window.
The difference with the Cyclamen is to just "dry them off"
in the June and put in the dark until September. 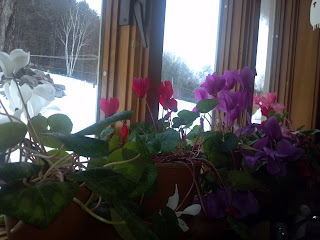