It arrived last night about 8PM in a mini-van with her Mom, two brothers and little sister. The black flies were thick at dusk, an unusually heavy air hung over the farm. We never have seen it so buggy here until this year. Is it due to the plight of the bat population? We think so.
Finally the mini-van heaved into view and all the siblings poured out along with a road weary Mom. The piano intact in the back.

We have a new farm hand, her name is Katie. Katie plays the piano. Our cottage has housed some wonderful tenants over the years; a professor, a raptor and sheep wrangler and detangler, a physical therapist, a psycholgist, a proficient hoola hoop-ist, a forester, two couples who started their families here, and now a pianist. 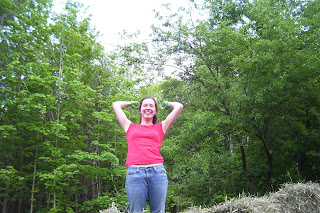 We are delighted to have Katie with us for as long as she stays. Today she helped us get in the first cut of hay, feeling strong and mighty! All of our farm helpers are students at Antioch and are here for a time while they work their way through school. Some stay longer than others but each and every one is special and unique. It is a opportunity for all of us. 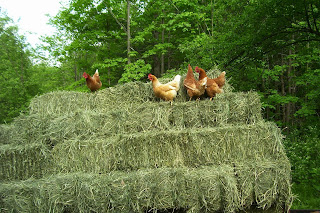 And so today the lilting melodies from the piano wafted across the heavy breeze. The little cottage was filled with melody! The piano tuner arrives tomorrow but I have to say from outside in the dusk of this lovely spring evening the music was akin to the scent of the lilacs all around the farm. Intriguing and delightful.
Posted by Long Ridge Farm at 8:43 PM 5 comments:

I am feeling much better! Thank you for all your well wishes. 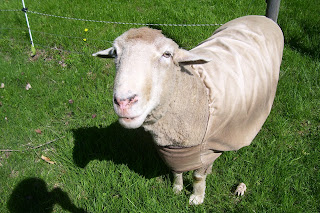 I have been living in the lap of luxury with grain daily, plenty of hay, spring pastures and even some alfalfa treats here and there. My shepherds are darn good to me even if I don't like when they come to the barn together. That always means they are going to have to give me medicine or check something. Every time! But really, life is good. I can put weight on my right leg again, as you see here I am using it. It's still stiff when I first get up but I find that if I hold it up a little, I still get the sympathy vote and I frankly like this hospitalization period!
Ashley's been a pretty good roomie, all in all. She tells me that the extra grain is doing her old bones good. Nancy gives me a leg massage each evening and Ashley gets a daily all over hip, spine and shoulder massage too! 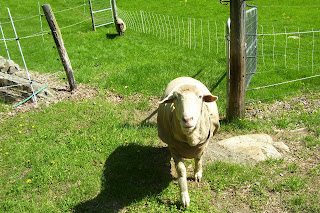 We are still separated from our buddies but at least we are near them and can say our hellos across the fence. I hear I will be here with Ashley another couple of weeks. *sigh* Yay! 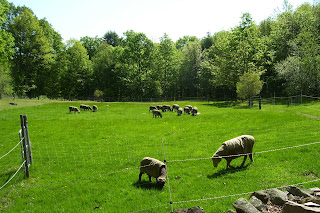 My big buddy, Wetherby, has been struggling with a leg injury for quite a few weeks. Certainly not the suspect reasons such as an inflamed toe gland or foot scald. We are quite vigilant about hoof care of our flock and regularly trim and inspect the sheep's hooves for any issues. But rather his top dog, rambunctious style put him a bit too feisty and the result is some sort of a strain/possible fracture in the fetlock area of the leg. Here he was first night in sickbay. 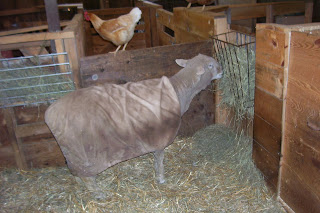 We had the vet here last Friday for annual vaccinations and had Wetherby checked to be sure we weren't missing something. A physical exam showed no outward explanation but surely he needed "bed rest". Oh boy....a sheep in lock down, what fun. Instantly Jack and I are thinking, he has to be confined for 4 to 6 weeks, let's see, who's the best ewe for the job of keeping Wetherby company? 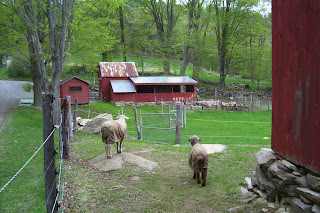 Ashley! 14 years old, has a deep and abiding love for grain, alfalfa cubes and a daily massage if possible. Ashley has had a good life since she came to us in 2006 but still deserves some wine and roses. So after the vet appointment we held her and Wetherby back to adjust to their odd couple relationship. Both are equally mellow. We needed to choose a companion for Wetherby that would not be excitable but just good company during his confinement. 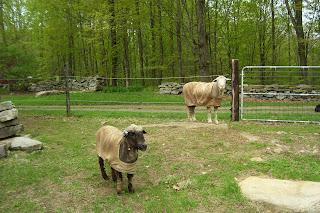 It's been a week and they are loving it! The first 24 hours were pretty whiny...Ashley hated being with Wetherby. But Wetherby was happy. He was able to lay around much of the time, no competition to go here or there, and despite her bellowing she survived. Now they are ensconced in their routine together. They each get a grain treat twice a day, some alfalfa cubes, their own pasture lot, hay at night and Wetherby has improved remarkably. A week ago today he could put no weight on his right leg at all. Within 4 days (and a bit of anti-inflammatory meds) he was walking with a limp. Today he is walking well, still babying it when possible, but we are well on the way to a hopeful recovery.

It's imperative that he remain confined for another month, boring as Ashley may find it, until he really can rejoin the flock for the summer. A flock of sheep can be a handful if given a scare or a mere frisky romp in the field together and I don't want to set him back for the sake of our convenience. 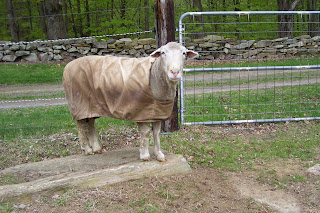 Our big shmoozy Wetherby....all get well wishes will be passed on!
Posted by Long Ridge Farm at 8:47 PM 6 comments:

This dear little Pebble Yoke sweater is finished. You can view the details on Ravelry. It is a simple pattern for children sizes 3 up to 2 years and is a quick little knit. I found some yummy pearlized buttons in a topaz color that snaz it up a bit. I have lots of yarns that are naturally dyed now, ranging from cotton to wool/mohair to 100% wool and more that will all suit this pattern. Some of the colors I have created are underneath the sweater. 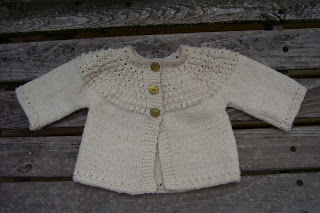 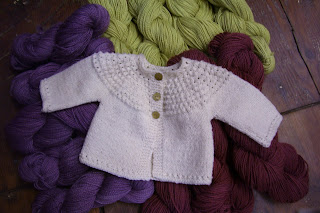 A new favorite in our home is Sam's Oriental Salad I found the recipe on her blog and we whipped it up last Friday and it is now on the list of regular meals! Very quick for times when you are short on time or have to take a dish to a get-together. We added grilled chicken, cut into slices and added at serving time. MMMMM good! Thanks Sam!

Mix the above except for the flavor packet from the Ramon Noodles. Set aside.

flavor packet from the Ramon Noodles

Mix the wet ingredients together. I put them in a tupperware and shake.

Right before serving, pour wet ingredients on dry ingredients and mix well.
Posted by Long Ridge Farm at 9:35 AM 1 comment: