First show of the season

I was in Connecticut for the CT Sheep, Wool And Fiber Festival last weekend. I arrived Friday afternoon to beautiful spring colors, glorious sunshine and 80 degree temps. The show was wonderful, as usual, lots of familiar faces and happy shoppers! I had planned to take pictures to post but once the show started it was too busy to remember. 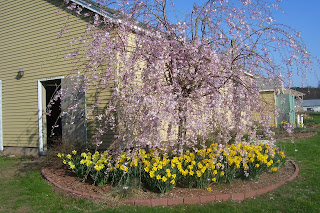 Below is the Long Ridge Farm booth which I did manage to catch as well as Golding Precision Fiber Tools, adjacent to me, while we were setting up Friday. Diane Golding and I are a few of the vendors who set up the night before, take in a meal together and relax a bit, refreshed for the next day. I understand the parking lot was once again full by 11. It was a bit chilly on Saturday but that always makes wool sound more inviting! Many thanks to all who visited our booth! 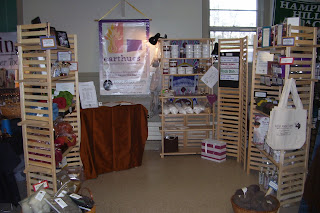 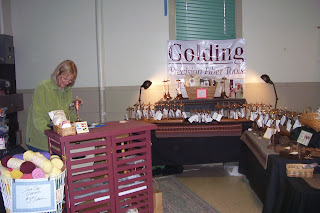 Posted by Long Ridge Farm at 10:42 AM No comments:

Everytime I dye with weld those words come to mind! And we are having wowie zowie spring/summer weather to go with it. Weld! 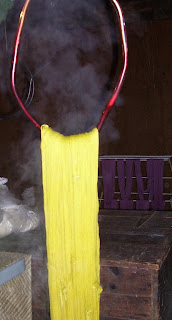 I couldn't resist this one! 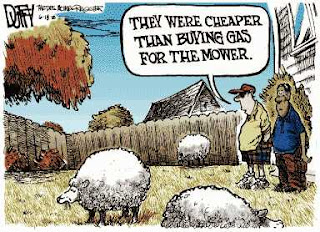 Posted by Long Ridge Farm at 10:30 AM No comments:

Getting ready for the CT Sheep and Wool and then the NH Sheep and Wool so the past few weeks have been pretty busy between fleece prepping to carding fiber to dyeing yarns and making labels, ordering inventory ad nauseum....this is my dining room and the shed off the kitchen which is a temporary dyeing space. Thank God I have a patient husband and dogs and a cat who are disinterested in raw fleece! 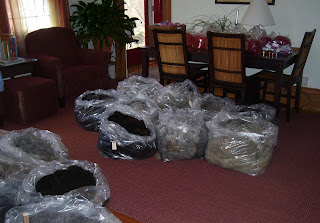 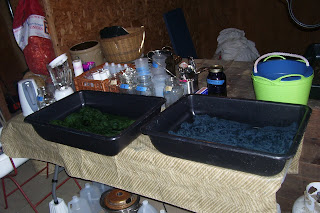 Posted by Long Ridge Farm at 10:04 AM No comments:

Jack's been busy tilling and reseeding pastures this weekend. We are having a glorious stretch of spring weather making it perfect for getting ahead of such projects. Now that the seed is down, we'd like a nice long, lazy day of rain. Just one a week for good measure! 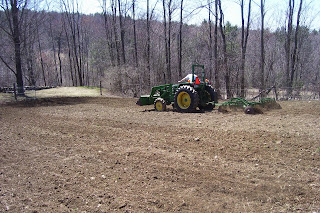 Posted by Long Ridge Farm at 9:00 PM No comments:

Webster ~ my loyal and helpful assistant

It's been a bit busy of late, getting ready for the spring shows. I spend countless hours every day at the computer. Webster often comes to offer solice and bring a calmness to my desk. He likes to lay down (as you can see) on my desk and bathe under the heat of my desk lamp. What a bud! 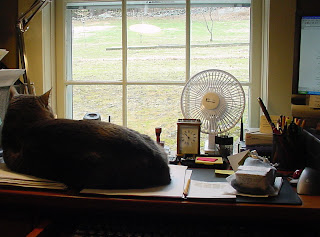 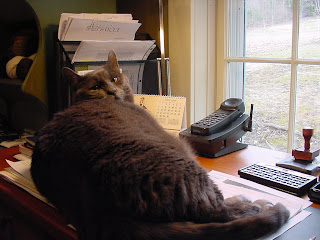 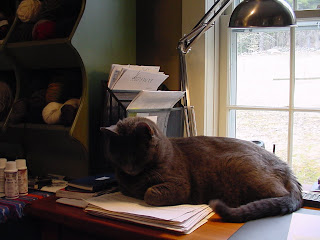 Been busy skirting fleeces all weekend along with dyeing pounds of yarn and spring raking! The weather has been pretty nice for all three actually. Here is my temporary home in one of the barns. Fleeces lined up like cordwood! 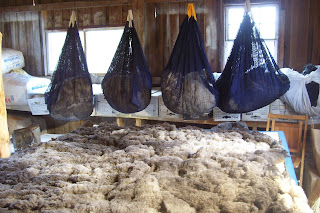 Here are the fleeces ready to go on Friday night... 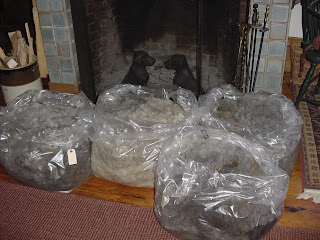 Here they are tonight...I am gaining. It takes about 45-60 minutes per fleece to skirt and prepare each fleece for sale. It is time-consuming but there is also a lot of analysing that goes on during the process. If I take my time and enjoy the process, it really is relaxing. 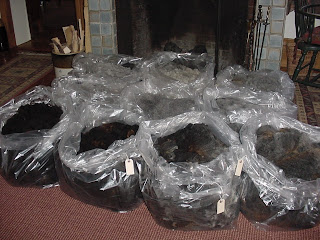 The power of Power Scour

With my mind turning to fleece, now that the sheep are sheared, I thought it would be good to show how well the Unicorn fiber products work for cleaning fiber. We offer the line of products in our online store www.longridgefarm.com/store.asp and you also can read about the product line at www.longridgefarm.com/unicornfibre.asp


This is a picture showing Crystal's raw fleece after shearing, a bit yellow (heavy grease, which is expected with the CVM/Romeldale) and above after I used Power Scour. WHITE! And the gray sample is Tybee's raw fleece (bottom) and then the same after Power Scour. Grease is gone! And what is so cool is you need only warm water and a very limited amount of time in the water. I let this fleece set for 3 minutes and it was this clean. I would do one more wash if I was going to use the fiber to spin. 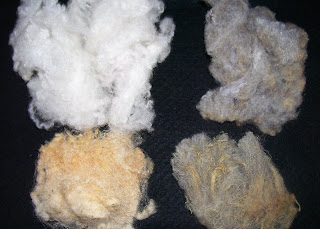 This is a really great product which I am delighted to show excellent visable results and with very little effort.
Posted by Long Ridge Farm at 11:27 AM No comments:

Ah, shearing day, finally. Friday we got the shearing area all ready replete with hay for the sheep to eat as they were done being sheared. We don't feed them before shearing because then their rumens would be full and it's like eating a Thanksgiving dinner and then doing somersaults. No thanks. After each sheep is sheared we put clean, and much smaller coats back on and put them in a separate area where they can regroup, eat and wait for their comrades. Our shearer was to arrive at 9AM Saturday. Here is the flock, coats removed, no breakfast yet and waiting. We keep them pretty confined during the pre-shear, as it's easier to get a sheep out of a tight flock then to try to catch one in a larger space. And it's a sight to behold when a stranger, like the shearer or the vet, comes into the barn. The sheep cram into the smallest, tightest group imaginable....far, far away from the stranger. 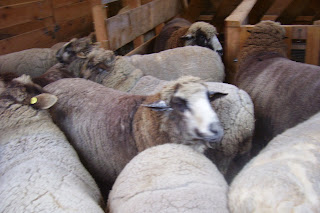 Here's the shearer, David Hinman, getting set up, for the first time. Yes, the first time. You see, it was like this. David brought out the first ewe to shear and we were all set, everyone in their places. We had Steve, our farm helper, ready to put coats on after shearing. Jack was sweeper(cleaning the floor between each shear) and to help Steve. I was taking the shorn fleeces away, labeling and putting them in a safe area during the process. And our friend Sandy was there to watch and enjoy. And then the lights started flickering. David was shearing away and said "what's up with your lights?" and I said "Oh s***". We lose power in Westmoreland on the average of once a week. But the lights kept flickering only, dim, bright, dim, bright. My toes were crossed. No please dear Lord, not now, NOT TODAY! And then, dead. No lights, no power, no shearing. The first ewe was half sheared and here we were at 10:15AM! 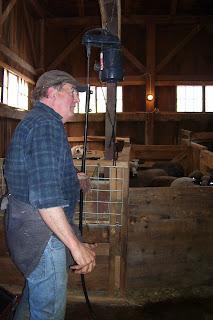 So David packed up his equipment and said he'd go shear another flock and come back in the afternoon. He had no sooner driven out of the yard and the power came back on...10:45AM. well, I have never been too good at the "oh well, whatever, that's cool." I was fit to be tied. I was ready to drive to the Public Utilities Commission office in NH but of course it was Saturday. Nothing to do but wait out the hours. We figured David would be back by 2ish. So we let the sheep have a bit more leg room in the same barn, gave them water and waited. And so did they. Sheep are good at just waiting. They didn't like it, but they were fine. And sure enough David rolled back in at 2:30 and we commenced the process. Here is Ashley, our 13 year old ewe, being sheared. She has the most incredible fleece I have ever had the privilege of handling. And each year, the past few, I keep it for my stash...sorry! (<: 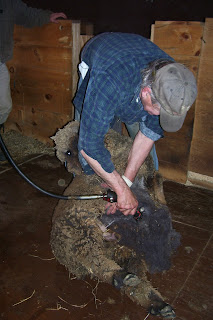 This is Daisy. It is so neat to see the fleece come off their body in one beautiful piece. When I gather it up after it is shorn the fleece is still warm. 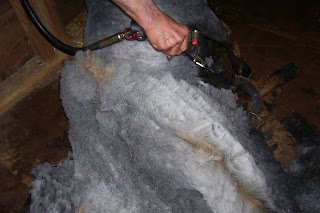 We finished up at 5PM, got the flock back to their regular barn where they had fresh hay and fresh bedding in the barns to bed down in for the night. They know the route from one barn to the other, it's down the lane about 50 feet. we opened the gate and before Jack could lead them to the barn they took the lead and were in the barn single file and eating away,. That was a first. Who ever said sheep are dumb is all wrong. Spoiled they are but what they give back is worth all the effort! What's most amazing is how small they are now without the fleece. Twice as many can fit along this one wall of feeders. 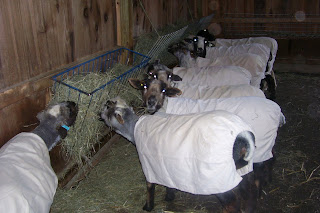 Charlotte ~ then and now

Today is Charlotte's birthday, our April fool! Two years old, another lamb from Memphis and one of the best in personality, conformation and color, a lovely gray brown fleece. CVM fleece gets softer and darker with age. Charlotte is long legged which I prefer in the CVM. She stands as high as Memphis and Bea who are also ideal CVMs. Charlotte has the "clown" face as you can see when she was just a lamb. SO cute! Here she was just born and then a month or so later. 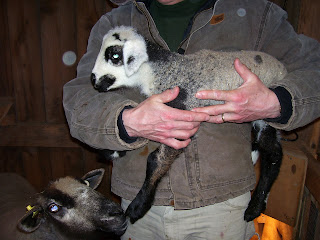 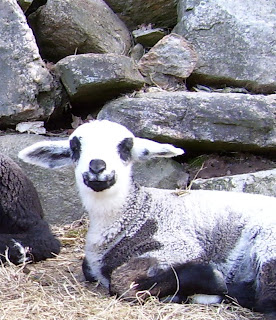 And here she is today at two. Happy birthday Charlotte! 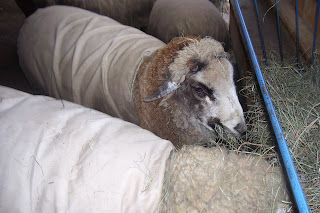