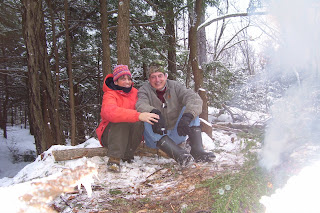 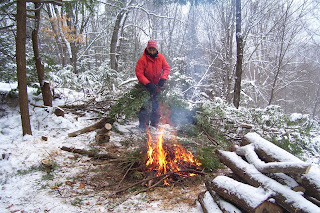 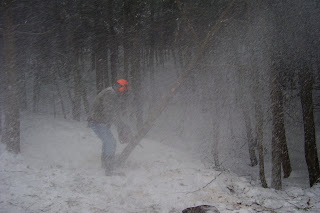 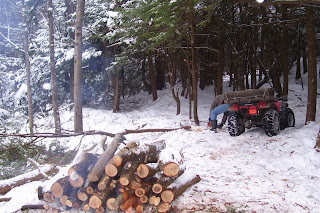 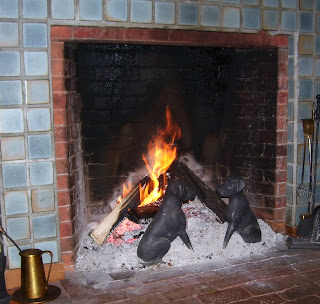 Back to the lookout today for our first fire. We stacked the wood to burn next winter and then started a fire with the dead wood and branches that Jack had cut so far, Before too long it was a nice warm fire. The snow fell all day today, not much accumulation but in such a gentle, all day kind of way.

Down below the church bell in the village chimed, woodpeckers and chickadees worked their way around us. It was so relaxing. I find that spending time like we did today, basically mindless and stress-free, opens the mind and frees it up when it next needs to work. Tonight marks the 10th day we have run one of our two fireplaces, this which is in the center of the house. It was a cold snap and the price of oil has been so high and we managed to heat 4 of our 9 rooms with wood for 10 days. Mind you, this is NOT the way to burn wood to heat a house but it was a fun and a priceless venture seeing as we cut the wood here ourselves. Happy to save a few bucks on fuel oil. So fire, yes, it's relaxing!
Posted by Long Ridge Farm at 4:19 PM 1 comment: 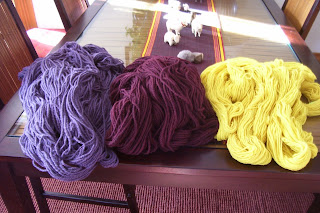 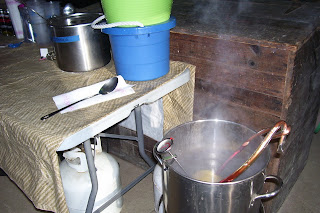 I have spent the past day getting some much needed dyeing done. Stock is low at the local store so I have dyed 2 and 1/2 pounds and am mordanting another 4# today so I can do more dyeing this week. It is bloody cold here! No other way to describe it. The wind is about 10 mph and the day temps are hovering around 10 above. But I closed the shed door to warm it up a bit and I can do the dyeing with one foot back in the kitchen. Works really well actually. The dyes from left to right are simple: logwood purple, logwood purple/madder and weld. Love that weld! Love them all really. The two left batches are on gray yarn from our Jackie and the weld is on white yarn from our Crystal. Back to the mordanting....
Posted by Long Ridge Farm at 2:16 PM 1 comment: 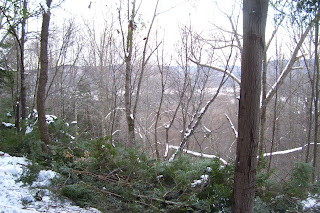 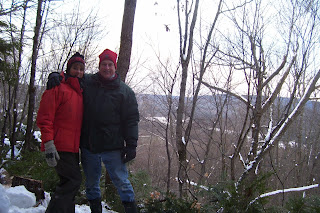 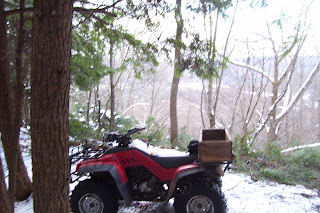 Jack took off for a few hours while I was dyeing, said he'd be back and he'd have a surprise. Late this afternoon we rode together on his ATV up the trails to what we call 'the ledges'. It's a huge outcropping with a very steep front, high up on the east side of our land. We always thought it would make a great spot to sit and look out on the view. We can see the village of Westmoreland to the left and down to the farmlands straight ahead. It is amazing how high up we really are. Well this is the view so far. It's a bit dicey cutting on the front of the ledges, most of which will wait until the snow is gone. There is a good 2 feet of snow up in those woods. Besides I always wondered if a bear didn't hibernate lower down in the ledges. Let him sleep! What a neat surprise today!
Posted by Long Ridge Farm at 5:34 PM No comments:

Words to live by! 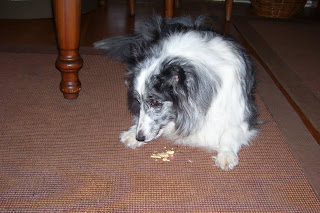 Eat dessert first, life is uncertain.
Shelley lives these words every day as she always eats her treats before she eats her meal. I have never argued this philosophy with her. She always lies down to eat her meals and treats. She learned that from our lab, Koko, who always lay down to eat. Koko and Shelley were good friends for the few years we had Koko. She was a rescue from a wretched situation in our county. Koko was a gentle, easy going dog who got 3 years of good living before she passed away. with us, she got to eat dessert first every day.
Posted by Long Ridge Farm at 11:13 AM No comments: 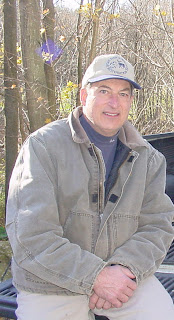 Happy birthday to you, dear Jack.
May you have many more, healthy and happy days to come!
Posted by Long Ridge Farm at 10:33 AM 3 comments: 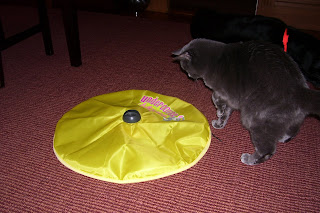 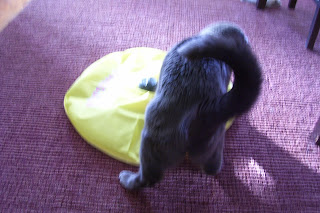 Webster has a personal trainer...kind of like going to the gym. It's called the Undercover Mouse and it runs on batteries, has adjustable speeds and basically is a maddening little mechanical mouse whose tail is the tease, that flits around under the yellow cover promising hours of cat and mouse games for any cat. Even Sidney, in the background is entertained! I turn it on and go about my business and Webster has his own source of entertainment. Ahhhh.
Posted by Long Ridge Farm at 7:47 PM No comments: 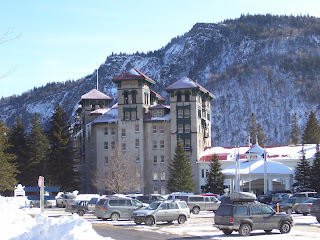 Dixville Notch, New Hampshire; The first town in the country to vote in national elections, with 26 registered voters, cast their ballots at midnight tonight. Last winter we snowmobiled with friends to the Balsam's Hotel (pictured) for lunch and this is the site of the town of Dixville Notch. The Balsams is located within the unincorporated area of Dixville Notch and is set on 15,000 acres of the 31,000 acres of unincorporated land.Voting will take place at the hotel. If ever you get a chance, come see why the Balsams and Dixville Notch are so well known. Striking country in the White Mountains of New Hampshire. The state is teaming with hopeful presidential candidates this week. From midnight tonight through tomorrow we lead the nation as the primaries begin. The energy is fantastic!
http://en.wikipedia.org/wiki/Dixville_Notch,_New_Hampshire
Posted by Long Ridge Farm at 8:37 PM No comments: 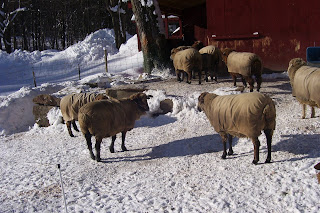 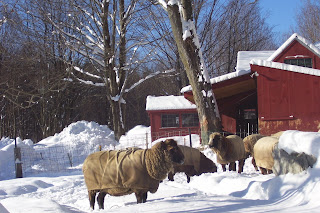 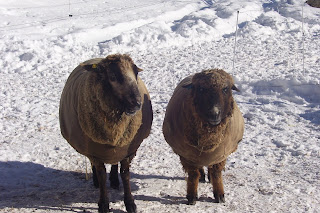 It's 5 degrees here at 9AM and yet the sun is giving a good amount of warmth. The sheep are enjoying the bright sunshine after their morning feed. And when the snow is fresh they love to eat it! I am always amazed how warm they are when I put my bare hand under their front legs at the belly line it is toasty warm. Three cheers for 4-6 inches of wool!
Posted by Long Ridge Farm at 10:28 AM 1 comment:

Postscript to the ride 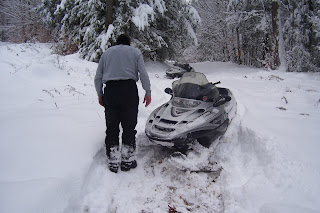 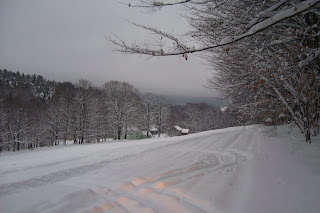 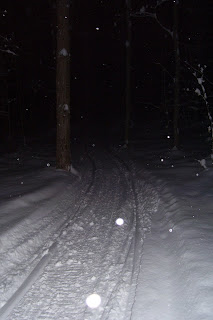 We had some fun...took a ride south and the trails weren't groomed and there were quite a few water bars which we rode through okay. But we got to a trail junction which had no signage so Jack decided to go left. For reasons of 30 years of being together and thinking out the area, I decided not to follow him right off. Sure enough Jack decided within 200' that he needed to come back so he backed his snowmobile up and all was well til he hit a water bar, and in trying to work through it got somewhat stuck. We managed to get him out and turned around but no matter what we did he couldn't get the skis to turn or respond with the track at all. Maddeneing! Until he figured out that the skis had hit the water area, then sat in the snowy area and caked and froze so they had no traction to help propel the machine. I didn't take pictures of us tipping the machine on it's side, scraping the skis off with a screwdriver and then we were good to go. We rode down through some beautiful country to Pisgah State Park, then came back up to the farm.
Today marks our 14th anniversary of snowmobiling. It was New Years Day, 1/1/1994, when we took our first ride in Pittsburg, NH. We poo-pooed the whole thing until we got aboard and went for a spin and have been hooked ever since. A hundred adventures we have had these past 14 years and hope to have 100 more!
The middle picture is a farm vista we passed by, the last picture was the trail home tonight...it is a winter wonderland!
Posted by Long Ridge Farm at 7:38 PM 1 comment: 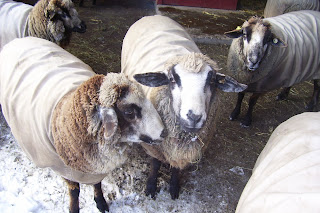 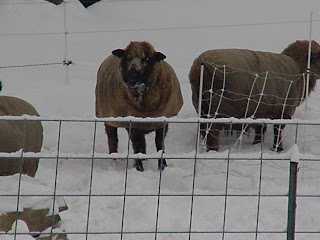 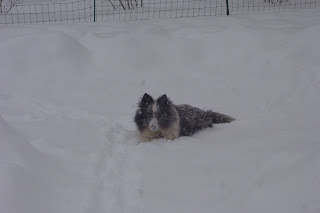 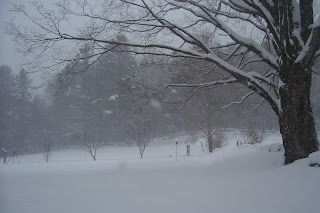 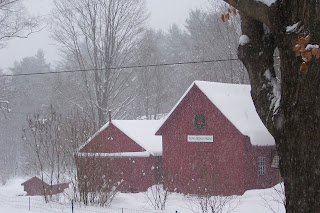 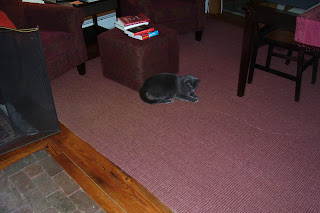 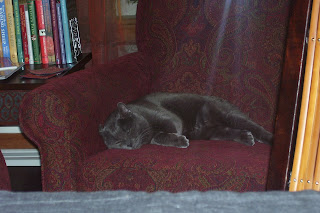 Happy New Year to all of you! We wish for your good health, love in your lives and comfort through your daily life.
We are here amidst yet another storm today, so far the snow stick is at 20" from 15" yesterday and it is snowing to beat the band!
Webster is grooving around the fire and has come to love chasing a piece of dental floss (clean, yes!) with a small knot at the end. Simple and very exciting! Shelley and Sidney are in heaven with the snow also.
We cleaned out the snow in the sheep area today to give them more loafing area...it had piled up the past 4 weeks, In fact We NH has now broken the all time snowfall record last met in 1876 with the total snowfall for December at 48". How about that! Off for another snomobile ride and onto the mail trails today...bye!

Posted by Long Ridge Farm at 1:48 PM No comments: