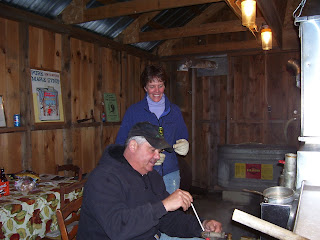 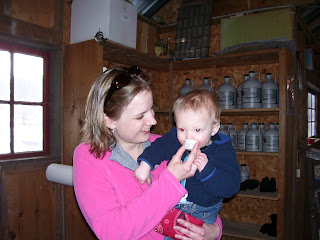 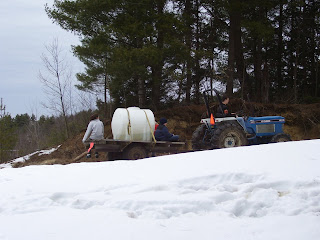 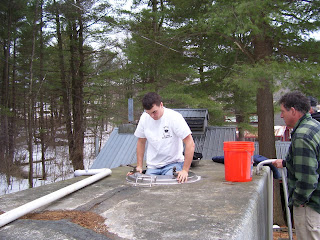 Saturday we went back to Ted and April's with the intent to help them gather sap. Saturday morning was spectacular....40's, sunny, real nice spring weather, and perfect sap running. Weather report said a front was coming in for late day; it was hard to believe. We went to their farm at 2:30 but by then the clouds had rolled in, not a good sign. April, Jack and I drove out to recheck tanks while Ted and a few friends stayed to keep boiling. When we got to the sugar bush the sap had stopped running. The run in the morning, according to Ted, was one of the best he'd seen in years....guess that was the gift for Saturday. That night we got an inch of wet snow. You can buy syrup from Ted and April, online at www.millbrookfarm.com
Pictures top to bottom:
Ted and April checking consistency before drawing off syrup; a customer and son sampling the syrup; bringing back more sap to biol; TJ Ferguson headed into the holding tank to scrub it out, there is already a teenager, Spencer, in there! It's actually a retired milk tank, all stainless and great for sap storage.
Posted by Long Ridge Farm at 8:58 PM