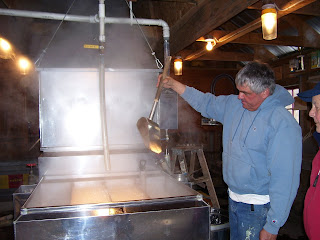 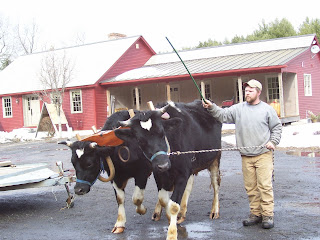 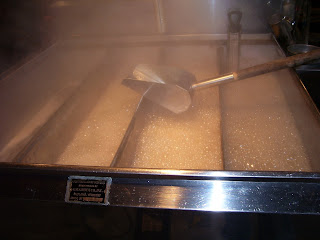 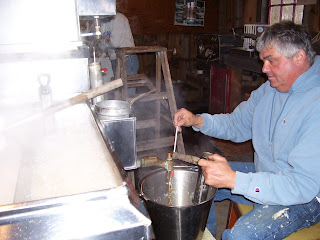 All over New England the smoke is pouring from sugar shacks where maple syrup is being made. Life just isn't right without a jug of real maple syrup at the ready for pancakes, waffles, ice cream or even when you need a fast and powerful sugar boost straight from the jug! Today I stopped by Ted and April Ferguson's sugar house here in Westmoreland to see how things are going. Ted said the sap isn't running like it should. In fact the man that taps our trees, Bill Sargent, came by to collect sap here today and said the same thing. Our sugar bush tends to be a bit later to yield as it is down in a grove where the sun doesn't melt the snow as quickly, so maybe we'll get a better yield this next week, but the sugaring season is coming to an end, so all fingers are crossed. The temps have to be below freezing at night and above freezing during the day. It takes a lot of time, expenses and energy to turn maple sap to syrup. Pictures top to bottom: Ted checking the consistency of the syrup before drawing it off. Matt brought his young team of oxen to help gather sap, good experience for the team and a help for Ted. These are the four sections of the boiling process, as the sap thickens it travels through the channels from left to right, the channel on the right being where the syrup is drawn off. Last, Ted draws off the syrup into a bucket, making sure the consistency holds as it leaves the channel. It is then sent to a final tub where it will cool and be bottled. If you are interested in buying some syrup from Ted and April log in at http://www.millbrookfarm.com where you can contact them for more information!
Posted by Long Ridge Farm at 6:12 PM