Self portrait of an artist 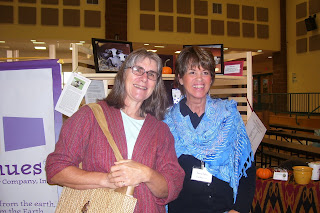 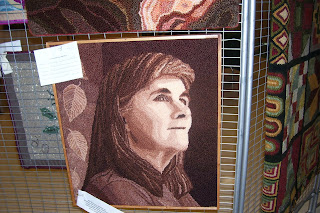 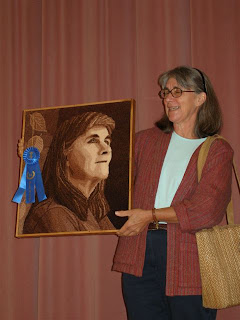 I was vending this past Saturday in Newtown, CT at the Newtown Hooked Rug show and during the morning hours Rita Buchanan stopped by to say hello and wanted to be remembered to Michele Wipplinger, Earthues owner. Many of you know Rita for her fiber arts teaching over the past few decades in every pocket of the country. She has retired from all of that and took to rug hooking of late. Rita mentioned she had entered a couple of rugs in the show. I took a break and as I walked into the display area I was taken aback instantly knowing one of the rugs had to be Rita's! Isn't is spectacular! It was hooked with yarn that Rita, of course, chose raw, carded, dyed and spun and then created the rug from a photo of herself. It is entitled "Watching birds fly south, a self portrait".
After the lecture and raffle later on, the announcement was made for the People's Choice Award and sure enough it was Rita's self portrait! As part of the award, next year's postcard for the show will feature the winning rug. Some artists just excel, even in retirement!